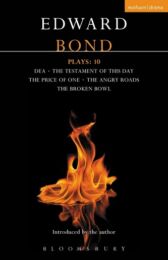 A heroine, has committed a terrible act and has been exiled

When she meets someone from her past, she is forcefully confronted by the broken society that drove her to commit her crimes

The Testament of this Day

This is Bond's third original radio drama, an arresting drama about the world today

A young man embarks on two journeys, though he is in control of only one

He soon discovers there is no going back, from either

The Price of One

He meets a woman carrying a baby of her own

A modern tragedy, this play is an exploration of eternity and madness and the supermarket culture

This presents a portrait of a a ghost town

Outside a harsh wind rattles the windows

Inside, people go hungry and start boarding up their homes

When a young girl insists on feeding her imaginary friend, a bitter struggle for a future ensues for the power of the imagination to transform lives

The Volume also features an Introduction by the author that looks at theatre and culture in a post-Brexit referendum, post-truth and post-Trump era

"Probably the greatest of any post-war British dramatist" ~ Mark Ravenhill,

"Bond's work is the work of a powerful writer, and a great and brilliant man of the theatre" ~ Luca Ronconi

""Edward Bond is the most radical playwright to emerge from the sixties ... the most savagely powerful dramatist writing today ... Bond's plays cannot be ignored" ~ Independent