The Body of an American 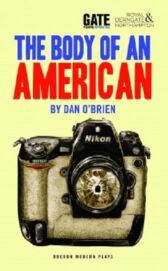 Mogadishu, 1993 - Paul is a Canadian photojournalist who is about to take a picture that will win him the Pulitzer Prize

Princeton, the present day - Dan is an American writer who is struggling to finish his play about ghosts

Flying from Kabul to the Canadian High Arctic, The Body of an American sees two actors jump between more than thirty roles in an exhilarating new form of documentary drama

The Body of an American is the recipient of the 2013 Edward M. Kennedy Prize for Drama Inspired by American History

It also received the PEN Center USA Award for Drama and the L. Arnold Weissberger Award