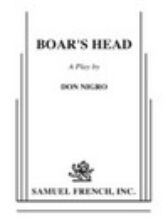 This big, colorful, uproariously funny and ultimately moving play tells the story of the Shakespearean characters who meet at the Boar's Head Tavern in East Cheap

We see the scenes Shakespeare tells us about but leaves out of HENRY IV, PARTS ONE AND TWO, HENRY V, and THE MERRY WIVES OF WINDSOR, centering on Doll Tearsheet, her unrequited love for Ned Poins, Ned's sister Nell, impregnated by Prince Hal, and Robin, a girl masquerading as a tavern boy, also in love with Ned

Bardolph, Mistress Quickley, Justice Shallow, Pistol, Jane Nightwork and a host of other characters who live at the edge of Shakespeare move to the center in this play, along with Jack Falstaff and a dead Windmill Keeper who might be Shakespeare himself

The language is rich, the characterizations compelling, and the play has a surprisingly powerful resonance of its own