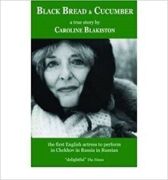 She first played the role of Charlotta in The Cherry Orchard in Tagenrog, Chekhov's birthplace in 1991, and the following year at the Moscow Art Theatre

Black Bread & Cucumber was realised from extensive diaries of her time living and working with Russian actors, both before and after the coup of 1991

It is not a play, but a true story shared with an audience

This copy is signed by the author