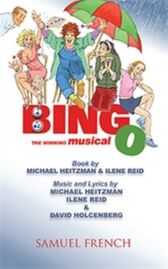 Bingo is a splashy, zippy, fun new musical comedy - great for theatres looking to produce a small musical with a big heart

These lovable characters spring to life with a smart, funny script and audiences will be laughing in the aisles when they aren't playing games of bingo along with the cast!

Best friends and Bingo pals Vern, Honey and Patsy brave a terrible storm in order to attend the yearly celebration of the birth of Bingo and tribute to its founder, Edwin S. Lowe

As the storm knocks out power at the Bingo Hall, Patsy and Honey remind each other of the ominous night fifteen years ago that began in the same way

In flashback, Honey tells us about the night Vern and her best friend, Bernice, had their falling out

Bernice's sweet, yet headstrong daughter, Alison, enters the Bingo hall in disguise - Bernice's health is failing, and Alison is determined, with the help of Bingo, to reunite her mother with her long-lost best friend

Click the Speaker listen to a Sample of the Score ...

I Still Believe In You

I've Made Up My Mind

Score available for Rent Only - runs about 90 minutes

"Songs to bring down the house!" - Los Angeles Times