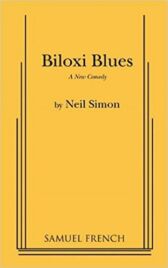 Here we meet him as a young army recruit during the Second World War, going through his basic training, learning more about Life, and generally developing his Writer's Sensibility at boot camp in Biloxi, Mississippi

Eugene and five other assorted enlisted men suffer under a hard nosed D.I., confronting the daily "mess" served up in the Mess Hall

And joining together in a visit to a local prostitute

For the first time, Eugene confronts the degradation of anti-Semitism

And for the first time he falls in love ...

"A play that rings with a newer, deeper, sweeter truth" ~ N.Y. Magazine

"A fine comedy, and another step in the process of making Simon neither so simple, nor so simplistic" ~ N.Y. Post