Bierce Takes On the Railroad! & Chopin in Space & Nixon Apologises to the Nation 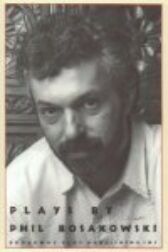 NIXON APOLOGIZES TO THE NATION

"Truly funny plays that not only make you laugh out loud--even in the reading--but also make you think for a long time about such big and varied topics as passion, politics and history, deserve to be kept alive. This new publication of three of Phil Bosakowski's plays, the first appearance in print of his last play, Nixon Apologizes To The Nation, helps assure that longevity. Highly adventurous and eminently theatrical, these plays are more like cubist paintings with musical accompaniments than literature intended to be read. The texts were written to be played, and for the fullest experience they must be<197>even if only by actors moving around with a few props. But the solitary act of reading them also has its rewards in the fun and detailed exposure to Phil's comic voice and compassionate world view. His humor, outrage and sense of American history combine and reconfigure in ways that surprise and unsettle our complacency, challenging us to look afresh at our history, our figureheads and ourselves. This is humor with an edge, but it doesn't bite viciously. Phil's hearty satire borrows from Monty Python and the Marx Brothers to goad us out of our grudges. With BIERCE (1974) Phil looks at political chicanery in late nineteenth century America through the hard edged and steady gaze of the journalist Ambrose Bierce.... ...With NIXON (1994) Phil combines the two approaches, wrapping the realistic line of development around a surreal free-for-all. In ten takes facing the television cameras Nixon tries to tape an apology to the nation, takes which momentarilys tall and inevitably provoke the eruptions of Nixon's warped visions of people and events in American history" - from Gay Smith's Introduction

"Phil Bosakowski is a cunning humorist. There are enough verbal, visual and musical jokes in Chopin In Space to keep you thinking for a long time about passion, inspiration, politics, religion, history and--since this is an affectionate tribute to the playwright's Polish origins--nationality. The play is really a tumbling procession of blackouts; it would be difficult to be funny about such subjects in any other format" ~ D J R Bruckner, The New York Times

"...Chopin In Space is an analysis of modern Polish history from a Groucho-Marxist perspective.... Bosakowski himself imitates the composer. Logic and chronology are sacrificed to achieve an almost musical arrangement of characters, themes, and events: The second scene is written in counterpoint; the third is a recapitulation of the first, introducing elements to be reshaped in the sixth; and so on. The jolting juxtapositions and surreal transformations that result are full of resonance" ~ Robert Massa, The Village Voice