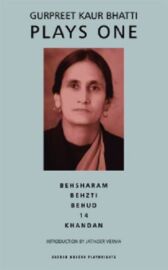 Her second play Behzti (Dishonour) won the Susan Smith Blackburn Prize in 2005 and rocked the world of theatre when it was cancelled after protests in Birmingham, UK, forcing the playwright into hiding

In 2014, Khandan (Family) was co-produced by the Birmingham Rep and the Royal Court Theatre

The five plays in the Collections are ....

Two daughters, two mothers, one father, a cardboard cut-out and a foul-mouthed granny a household at war and a family which will do anything to protect its secrets

Past her prime, Min happily spends her life caring for her frail, vicious mother, Balbir. Today, for the first time in years, they're heading out to the local Sikh temple. In a community where public honour is paramount, is there any room for the truth?

(Beyond Belief) A playwright attempts to make sense of her past by visiting the darkest corners of her imagination. Inspired by the events surrounding Behzti, Behud is the compelling story of an artist struggling to be heard

It's 1983 and brainbox Tina's parents are always shouting - her mum says she's developing too quickly and her best friend Sharon has a dark secret. Thirty years later, Tina's life hasn't turned out quite how it was supposed to ...

Widowed matriarch Jeeto has a strong sense of her past and principles. She's spent her life working hard and making sacrifices for her children. But eldest son Pal isn't following in her footsteps. What happens when the legacy of a father collides with the dreams of his son?