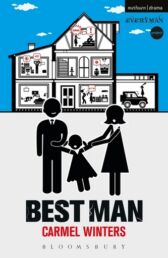 Don't think for one minute I'm going to just disappear and let the two of you play happy families ... That is not the deal here, that is so not the deal!

This bold new play deals with the near-taboo topics of sex, power and parentage within modern relationships

Set in the intoxicating height of the boom and - finally - the sober fall of the bust, Best Man prompts a public reckoning of our most private struggles as questions of power within the family are examined with scorching insight ...

Meanwhile, her husband and would-be novelist, Alan, is staked out at home, minding their children and earning 'pin money' by writing best man speeches

Juggling the modern-day demands of job and family is not easy, but this sparring pair seem to have arrived at a win-win situation

That is until Marta moves in

Hired to take care of their children so that Alan can finally write his novel, this sexy, straight-talking Bolivian nanny brings buried tensions to the fore and soon the entire house is " ... smoking with lust for Nanny"