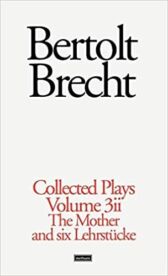 "One of the greatest poets and dramatists of our century" ~ Observer

Brecht's Lehrstücke or short 'didactic' pieces written during the years 1929 to 1933, are some of his most experimental work

Rejecting conventional theatre, they are spare and highly formalised, drawing on traditional Japanese and Chinese theatre

They show Brecht in collaboration with the composers Hindemith, Weill and Eisler, influenced by the new techniques of montage in the visual arts and seeking new means of expression

Brecht intended them for performance by schools, workers' groups and choral societies rather than by professionals, with the idea that the moral and political lessons contained in them are best conveyed by participating in an actual production

In addition to the six Lehrstücke, the volume contains The Mother, a longer play, again with music by Eisler, based on the novel by Gorky. A story of dawning political consciousness, told with irony and narrative drive, its central character is one of Brecht's great female roles.