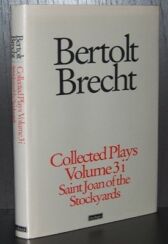 It tells the tale of Joan Dark, a virtuous knight in a Christian army of salvation, who makes the Stockyards her field of battle when she clashes with meat king and philanthropist Pierpoint Mauler over the heart of business and the soul of labor

The play was never staged in Brecht's lifetime