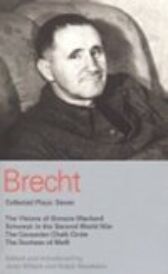 The Caucasian Chalk Circle, based on the biblical story of the judgment of Solomon, was originally written for production on Broadway, with W. H. Auden responsible for the verse. It has since become one of Brecht's most popular works

The translations are ideal for both study and performance