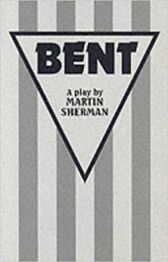 Max is gay and sent to Dachau concentration camp

In camp he falls in love with his fellow prisoner Horst, who wears his pink triangle with pride

But, as Nicholas de Jongh wrote in The Guardian, "it is ... a play of importance, power and pathos which should concern us all"

In its subtle characterisation and powerful analysis of human dignity under extreme duress, it is a play that transcends the boundaries of its ostensible theme

"A heroic myth ... It has the laughter which Yeats asserted lay at the heart of tragedy" ~ John Elsom, The Listener

"Fascinating ... a work of considerable dignity and passion" ~ Michael Billington, The Guardian

"Sherman dramatises the journey to oblivion of Max, a young gay German, from the morning after a hedonistic night of sex and cocaine in 1934 to Dachau ... Bent looks now [in 1999] like a tremendous post-war theatre classic" ~ Nicholas de Jongh, Evening Standard