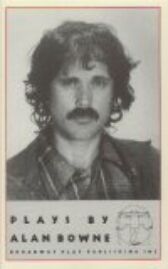 BEIRUT
Alan Bowne's apocalyptic vision of a totalitarian future has been produced by scores of theaters all over the world.

"...BEIRUT, Alan Bowne's stunner about love in the plague years. It's `the near future:' we're in a dump of a room on the Lower East Side, where a young man named Torch has been quarantined after testing positive for a nameless disease that sounds a lot like AIDS. His girlfriend, Blue, who has not been infected, makes the dangerous journey across the quarantine line to be with him.... The marvel of Mr. Bowne's work is the richly raunchy language, tuned to the gritty rhythms of the street. It's crude yet lyrical; even at its most scatological, the dialog sings.... They (Torch and Blue) are a Romeo and Juliet of the boroughs, an East Side story.......the poetry and power of BEIRUT..." Walter Goodman, The New York Times
"...Alan Bowne makes a statement about sexually transmitted disease that is more powerful than all the soapbox orations which have been attempted theatrically to explore the subject. He deals with the human spirit as it faces the inevitable, and it is a spirit of hope and love, of logic and of empathy..." T H McCulloh, Drama-Logue

First produced in New York by the Manhattan Class Company, and then in a commercial production at the Westside Arts Theater - single interior set

FORTY-DEUCE "A powerful and fascinating excursion into the nightmare world of homosexual prostitution. Although not for the squeamish, the impressive debut play by Alan Bowne is utterly convincing." Variety
"A harrowing drama--the world drawn by Bowne with such nose-rubbing honesty is a reality we all know exists." New York Post
"Simply dazzling, a sharply focused nether world, full of danger and surpassing sadness. These boys live on the bitter edge with survival a matter of day and night doubt. They're eerie men-children thrust from pubescence into a premature sort of middle age. There isn't room in their world for the conventional emotions." Gannett Newspapers
Originally produced at the Perry Street Theater, New York

SHARON AND BILLY
"The Magic Theater continues to bolster its reputation as a producer of, and magnet for, first-rate drama. SHARON AND BILLY, a delicate and even amusing study of brother-sister incest... Bowne has etched an eloquent appraisal of a Southern California family of four in the late 1950s.... The incest incident which leads to fifteen-year-old Sharon's pregnancy is handled gently and almost amiably.... Bowne suggests its occurrence, a subtle scripting which makes the shock value more humane than heavy-handed. The parents never do learn who fathered Sharon's baby, but the possibility that they might serves to stir audiences. The tender manner in which Billy inquires, gropingly, about his offspring is a gem of a scene." Herb., Variety
Originally produced by the Manhattan Class Company