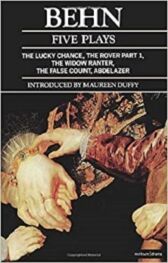 As one of the first English women to earn her living by her writing, she broke cultural barriers and served as a literary role model for later generations of women authors

The Widow Ranter is a tragi-comedy

And The Lucky Chance ran into instant criticism for immorality

The Rover is her most famous comedy

And Abdelazar is her only tragedy

"Masterpieces are not single and solitary births; they are the outcome of many years of thinking in common ... All women together ought to let flowers fall upon the tomb of Aphra Behn" ~ Virginia Woolf