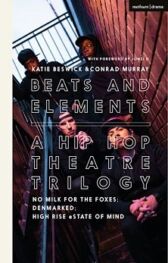 This collection of three hip hop plays by Conrad Murray and his Beats and Elements collaborators Paul Cree, David Bonnick Junior and Lakeisha Lynch-Stevens, is the first publication of the critically acclaimed theatre-maker's work

The three plays use hip hop to highlight the inequalities produced by the UK's class system, and weave lyricism, musicality and dialogue to offer authentic accounts of inner-city life written by working-class Londoners

The plays are accompanied by two introductory essays

The first gives a specific social and historical context that helps readers make sense of the plays, the second positions hip hop as a contemporary literary form and offers some ways to read hip hop texts as literature

The collection also includes a foreword by leading hip hop theatre practitioner Jonzi D, interviews with the Beats & Elements company, and a glossary of words for students and international readers

The Plays
No Milk for the Foxes by Paul Cree and Conrad Murray - Weaving hip hop lyricism with comic naturalism, this play tells the story of two security guards on zero-hours contracts working the night-shift at a washing machine components factory

DenMarked by Conrad Murray - This solo performance is an autobiographical story that weaves hip hop with Shakespeare's Hamlet. It narrates Conrad's account of growing up in a violent family in South London, as an abused mixed-race child in the social care system, trying to make his way in the world and seek reconciliation with his absent father

High Rise e(S)tate of Mind by David Bonnik Junior, Paul Cree, Conrad Murray and Lakeisha Lynch-Stevens - Inspired by JG Ballard's novel High Rise, this is the dystopian tale of a high rise tower block in London, interwoven with the performers' personal autobiographical stories about the housing they have lived in