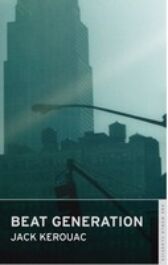 Written in 1957, but only recently re-discovered in manuscript form in a New Jersey warehouse, Beat Generation bears all the hallmarks of vintage Kerouac with its flowing, stream-of-consciousness language, orchestrated with a jazz-like sense of adventure and rhythm Entertaining and exuberant, and conjuring up a thrilling, smoke-filled, atmospheric New York of bygone days, the play probes the American working-class psyche and tackles profound questions of religion, mortality and re-birth From the Introduction ... "The play Beat Generation marks a wonderful addition to the Kerouac oeuvre It will be great fun to see what happens with it - I can easily imagine it being performed and each staging being incredibly different from the last - it's all about what you bring to it It is a play of its time ... in bits and pieces it is reminiscent of Tennessee Williams, Clifford Odets and a bit of Arthur Miller But by comparison to those playwrights whose work is formal and well defined, this play is loose, unfettered; it is about juxtaposition, relation, words and ideas boucing off one another, riffing in a bebop scatter Beat Generation opens in the early morning in an apartment near the Bowery, with drinking - the reverie of the first glass It is a man's world - these are working men, brakemen for the railroad, drinking men, who spend their day off betting on horses, men who swear by saying '"durnit", men who have a girl waiting on them, warming their coffee It is set in a disappeared New York City, with the smoky scent of cigarettes hanging over all, men playing chess, the racket of the elevated subways, the feel of life lived underground, everything a little bit beat, pervaded by the music of conversation Working in spurts, Kerouac spewed this "spontaneous bop prosody", or "jazz poetry" Beat Generation is about talking and friendship and the biggest question of all - existence Kerouac and his rough-hewn characters - just this side of hobos - want to know how and why we exist and then in some spontaneous combustion they come to know that in the end there are no answers, there is just the moment we are in, and the people around us Here is the romance of the road, re-birth and karma - Kerouac's peculiar and deeply personal combination of the working man discussing astral bodies, karmic debt, past lives and the selling of Jesus Here is the power of ideas and the difficulty of escaping belief And here is the love of God and the fear of God In the end, Beat Generation is a treat, a sweet found under a sofa cushion For those of us who never had enough Kerouac, now there is more" ~ A.M. Homes "I remember being awed by him and amazed by him" ~ Alan Ginsberg