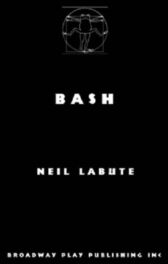 This is the Broadway Play Publishing edition

In IPHIGENIA IN OREM - M1 - a Utah businessman confides in a stranger in a Las Vegas hotel room, confessing a most chilling crime

And in A GAGGLE OF SAINTS - M1,F1 - a young Mormon couple separately recounts the violent events of an anniversary weekend in New York City

All three are unblinking portraits of the complexities of evil in everyday life, exhibiting LaBute's signature raw lyrical intensity