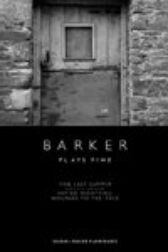 His plays challenge, unsettle and expose

The first places the wilful suicide of a Christ-like prophet, Lvov, in the context of modern chaos, illuminating his moral ambiguities with comic or painful parables

The second takes its inspiration from the significant absence in Shakespeare's play, that of Lear's wife, the queen whose murder is here discerned as the origin as the great family tragedy

In Hated Nightfall Barker's speculative imagination leads him to identify these as the children's tutor, Dancer, and a recalcitrant servant, Jane

Dancer is perhaps Barker's archetypal hero, febrile, iconoclastic, yet in search of a self-sacrifice nothing appears to justify

In Wounds to the Face, our complex and sometimes violent relations with our own physiognomy form the psychological link between related scenes of wounding, notoriety, shame and vanity in a play of kaleidoscopic energy and imagery