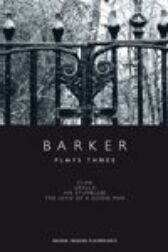 Howard Barker is one of the most significant and contraversial dramatists of his time - his plays challenge, unsettle and expose

In I Saw Myself a woman's longing to understand her compulsion to transgress the laws of her society comes into collision with the conventions of an art form. In the weaving of a tapestry Barker's thirteenth-century heroine privileges private life over public responsibility. If she is cruelly punished she is also granted self-awareness

A critical moment in social decay is also at the centre of The Dying of Today, in which a stranger who luxuriates in the telling of bad news observes the effects of his devastating narrative on a humble barber. The barber's recovery from pain, and the beauty of his sensibility, bring the two strangers into an emotional proximity

Barker's most experimental work in form and content is probably Found in the Ground, a mobile, musical work set during the last days of an aged Nuremberg judge whose baying hounds and burning library form an uncanny background to his wayward daughter's struggle to make meaning from the atrocities of the twentieth century

The contradictions of the humanist personality are explored in The Road, the House, the Road. Erasmus' obscure colleague Aventinus was found dead on a wintry road. How he arrived at his solitary death forms the subject of this speculation on scholarship, mischief and the murderer's vocation