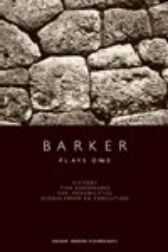 Howard Barker is one of the most significant and contraversial dramatists of his time - his plays challenge, unsettle and expose

These plays are among his best-known works, and their energy, poetic language and imagination have fixed them firmly in the international repertoire

Exploring the tragic form defined by Barker as Theatre of Catastrophe, three of the plays speculate on human behaviour in moments of historical crisis ...