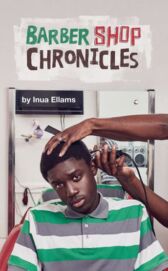 Inspired in part by the story of a Leeds barber, the play invites the audience into a unique environment where the banter may be barbed, but the truth is always telling

The barbers of these tales are sages, role models and father figures who keep the men together and the stories alive

"This is an absolute cracker. Inua Ellams has the simple but ingenious idea of exploring black masculinity through the humble barber's shop ... It's funny, fast, laced with music and dance ... But deep down this is also a thoughtful, serious and moving piece of drama ... he writes with zip and a wonderful ear, and the piece is beautifully woven" ~ Financial Times ★★★★

'It's a play crammed with questions, discussing African attitudes to parental discipline in one scene, and the role Nigerian Pidgin plays in cultural identity in the next. Idea follows idea: Christianity as a business fattening the wallets of pastors; the western media's depiction of Lagos; the way that words can be used to debase and destroy. Again and again the plays returns to the theme of black masculinity and the different shapes it can take ... The tone of the play shifts fluidly from comedy to poignancy to rage ... This is all handled with skill and a huge amount of warmth. Barber Shop Chronicles is a pleasure to experience. The level of joy in the room is high ... Rich, exhilarating theatre that opens a window into a world of men" ~ The Stage ★★★★★

'It's always bracing to watch the National Theatre open its arms, doors and repertoire to new work, new audiences, new experiences. There's certainly not been anything like this all-male, all-black piece from poet/playwright Inua Ellams, which bounces with brio as it whisks us around a series of African barber shops in six countries on two continents over the space of a single day ... it becomes gradually clear that these resolutely female-free spaces are also part confessional, part psychiatrist's chair for both the staff and customers. Hefty topics ripple and re-echo over the thousands of miles that separate the establishments: how to be a father, how to be a son, how to be a man. A joke about a fly in a pint also travels effortlessly" ~ Evening Standard ★★★★