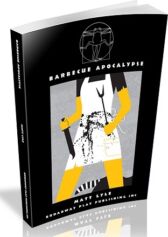 The hosts Mike and Deb struggle with feelings of inadequacy about their home decor, their clothes, their careers, their culinary skills, and pretty much everything else

Ash is a successful yuppy with impeccable taste

But annoys the hell out of his wife, Lulu, who likes to get very drunk, very quickly

And his new girlfriend, Glory, is just too young and beautiful to be tolerated by other women

And who's pregnant and who's just put on a little weight

And a nearly crippling iPhone addiction

The superficial, neuroses-laden interpersonal squabbles bubble over to a flash of inept violence when Win makes what we learn is just one in a series of passes at Deb

As the Act closes, the group discovers that the rest of the world has been literally falling apart during their little, terrible barbecue

In a year where the only way to measure success is survival, roles have reversed

Or has pushed them to the brink of extinction ...

"Barbecue Apocalypse suggests, in no uncertain terms, that these thoroughly average Americans were far more savage when they were sipping mango margaritas and failing to make small talk as compared to a year later when their new hobbies include devouring raccoons and threatening to stab electronic devices, among other acts defined as depraved by current standards of decorum" ~ Kevin Greene, Chicago Stage Standard