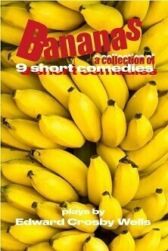 The 9 Short Comedies in the Collection are ...

At an airport customer service counter an irate traveler is missing his baggage. The customer service representative tries inventive ways to pacify the demanding and threatening customer. The clerk remains imperviously invincible to the threats.

Poor Gladys. She left the living room for less than a minute, and when she returned her husband was gone. Well, not exactly gone—Harry turned into a chair. Can a marriage survive when one of the partners is an overstuffed recliner?

It's Labor Day. DICK and JANE— most any age—are in their backyard grilling hotdogs. They discover that a large hole has appeared overnight. They cannot see its bottom, but occasionally they hear, from deep within it, Barry Manilow singing Copacabana (At the Copa)

Bare stage. Three conniving judges of a local art competition, each with their own devious agenda, select the winning entrees for a forthcoming exhibition

Sid and Sylvia Dumpling, an unassuming suburban couple whom neighbors would say are likable and friendly, take their food very seriously. Some might say too seriously. Haute Cuisine plays a disproportionate role in their lives as they go on a quest for that ultimate gastronomical ecstasy. Very few appreciate the subtleties of the palate as much as Sid and Sylvia Dumpling

A kitchen table, 2 chairs, a butcher’s block. Hank and Millie Slaughter are having a conversation concerning the butcher’s severed thumb and the evening’s menu. The question is, who’s really the butcher and whose thumb is it anyway?

SALLY and TEDDY, two women of indeterminate age, pedal their way to a slimmer, more fit and more attractive paradise

No Set except a small table and 3 chairs. A bit of nun-sense about three nuns who are banished to Little Mercy, Colorado—an abandoned silver mining town high in the Rockies, to do penitence for conduct unbecoming the wives of Jesus. Their misfortune turns into a fortune found in the outhouse when Sister Mary Madeline discovers an unusual light shining between her legs

Rosy is waiting for her plane to board that will begin her journey around the world. Smith wishes he had never sat next to her as Rosy terrorizes him in her own inimitable style. Both have something to hide

To read an extract from Missing Baggage, click here