Authenticity in Contemporary Theatre and Performance - Make it Real 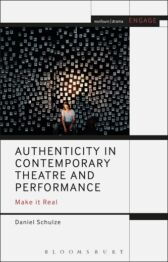 Authenticity is one of the major values of our time

The study examines three types of performances that exemplify this structure of feeling: intimate theatre seen in Forced Entertainment productions such as Quizoola! , as well as one-on-one performances, such as Oentroerend Goed's Internal, immersive theatres as illustrated by Punchdrunk's shows The Masque of the Red Death and The Drowned Man which provide a visceral, sensate understanding for audiences

It argues that this hunger for authentic, unmediated experience is characteristic of a structure of feeling that has superseded postmodernism and that actively seeks to resignify artistic and cultural practices of the everyday

1. In Search of Authenticity