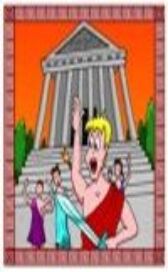 It was different to ours, but it was the model from which the founding fathers of the United States of America developed their Constitution

In Athens, Representatives were chosen by ballot, and if he failed he could be ostracized from the City for 10 years

Complete 50 minute show supplied ready to perform by 15 to 100 children with script, (including stage directions) historical Fact Sheets, Art Pack showing how to make the scenery, costumes and props. A CD is supplied with both rehearsal and performance backing tracks

Everyone Can Have a Vote

It Could Be You!

There are also two 10 Minute mini-versions suitable for Assembly available separately, each including a CD of three songs, and a reduced Script and Art Pack

For Athens - To Vote or Not to Vote? click here

And for Athens - It Could Be You! click here