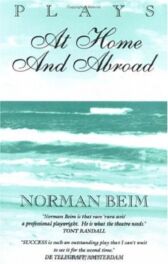 Gina and Bart, a young, loving couple, come to New York from the Midwest to forge a career in the theatre. Gina's convinced that their marriage won't last unless they're both successful and she's willing to stop at nothing to further their careers. Bart, on the other hand is guided by moral scruples in their climb to the top. The play, with a lighthearted touch, makes a rueful comment on business principles in America

Gail Lattimore, a wealthy socialite, is transformed into a beauty by Peter Marlow, a famous plastic surgeon. She divorces her husband and marries Peter who's decided to give up his philandering. Peter is brought up short when he finds that his wife's whole life is dedicated to preserving the beauty he's created

The scene is a college town during World War II. Bob Carter returns home with a dishonorable discharge. He's been a passive participant in a homosexual act and is too ashamed to let anyone know. A bi-sexual soldier, a friend of his younger sister, is aware of his predicament. Greg, the bi-sexual soldier, is frustrated because Bob'! s sister has decided not to go through with their affair an! d the two young men end up spending the night together. This second homosexual encounter leaves Bob confused and frightened with no one to confide in or turn to for advice. A sensitive and poignant analysis of sexual confusion

"Handled in depth, it proves the theatre is capable of an ever expanding awareness of society's hitherto suppressed problems" - BACKSTAGE, NEW YORK CITY

Lily believes that her husband, Archie, has been drowned at sea while on a USO tour playing Hamlet. After seven lonely years and an uphill struggle as an actress she decides to marry a rather stuffy business man for security, when who should pop up but Archie, freshly rescued from a desert island, where he had quite a delightful time fraternizing with the native girls. Lily is happy to see h! er beloved husband, but he must pay for his transgressions

A Leg of the Journey - a comedy-drama in two acts. 3 males. 2 females. 1 interior

Glenn and Eleanor Gordon seem an ideal couple until Glenn, who's been writing unpublished novels for years, is suddenly discovered. The success of his book leads to doing publicity tours, and to his being offered the position of dean at the university he's been teaching. Eleanor, however, is a private person and is unwilling to enter the arena of public life. The marriage is shaken

A Marriage of Convenience - a comedy in two acts. 3 males. 2 females. 1 interior

Gary Vincent, a famous novelist with political ambitions, is persuaded by his campaign manager to conceal his homosexuality by marrying his secretary, who happens to be a lesbian. Gary finds, to his amazement, that he's been a closet heterosexual all along and falls in love, not with his wife who's fallen in love with him, but with the young daughter of a political boss. However, his homosexual past comes to haunt him when his bride to be discovers his past history

"A comedy that spoofs politics in a deliciously witty and fun-filled way...a sparkling commentary on the political scene" - ENTERTAINMENT, NEW YORK CITY