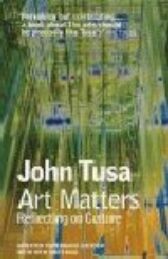 In Art Matters John Tusa investigates the many imperatives of why art does matter for a people and their nation. In his high-profile role as head of the London's Barbican Centre, Tusa has been called on time and again to speak-up for the arts (performing and fine arts) and put their case to funders and the government

His book is drawn from the frontline of experience in which he sets out his beliefs on why the arts matter, dissects the politics of art funding (including often stinging indictments of the Blair Administration), and presents a host of actions to solve the current dilemmas which the arts in Britain face

Authoritative and plain spoken, Art Matters sets a new agenda by laying bare the current state of the arts. Included is a series of essays on 'Politics', in which Tusa debates the issues concerning the arts with Prime Minister Tony Blair, Culture Minister Chris Smith and Arts Council Chairman Gerry Robinson

"Provoking and scintillating ... A book about the arts should be precisely like Tusa's" - The Times