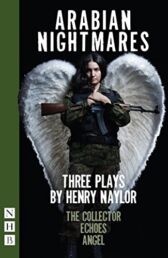 Three striking dramas set in war-torn Syria and Iraq, by "one of our best new playwrights" featuring the epic and bloody adventures of an Iraqi translator, a London schoolgirl and a crackshot sniper ...

The Collector is a tale of creeping darkness, set during the Coalition's occupation of Iraq, as a team of prison guards become brutalised by war

Echoes is a bloody story of colonialism ancient and modern and the rhyme of history, drawing astonishing parallels between the lives of a Jihadi bride and a Victorian pioneer

"Henry Naylor might be a bit of a genius ... he uses language in an exquisite way. Clever and subtly nuanced, the writing is evocative and full of imagery, yet sparse enough not to overload us and give us enough time to comprehend the brilliant storylines" ~ Broadway Baby

Angel is set in a Syrian town, where the apparently indestructible Angel of Kobane a crackshot sniper with a hundred kills to her name is all that stands between the town's citizens and the fearsome approach of ISIS

"War reportage at its best and great theatre" ~ The Times

They have won eleven major international fringe awards, including several Fringe Firsts, and Angel was one of The Times' Top 10 Best Plays of 2016