Appointment with a High Wire Lady 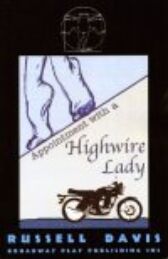 "Having flirted with death, a young man has crash landed into a state mental hospital, where he sits silently in the dayroom

In Russell Davis's Appointment with a Hire Wire Lady, the patient ...is gradually drawn back into life by a friend from his past ... Mr Davis is subtle and unsentimental in telling a story about two people trying to find a connection that has previously eluded them" ~ Mel Gussow, The New York Times

"There's so much good writing in Russell Davis' Appointment with a Hire Wire Lady ...

During it's penultimate moment, the platy achieves a level of descriptive prose rarely seen on a stage ... all of Davis' ideas merge into an ornate tapestry and the delicacy of his weaving becomes, for the first time, apparent" ~ Bob Harrington, New York Post