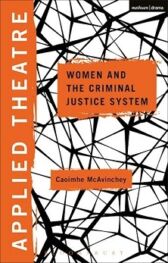 Applied Theatre: Women and the Criminal Justice System offers unprecedented access to international theatre and performance practice in carceral contexts and the material and political conditions that shape this work

From radio plays to film

From popular participatory performance to work staged in commercial theatres

Extracts of performance texts, developed with Clean Break theatre company, are interwoven through the collection

Television and film images of women in prison are repeatedly painted from a limited palette of stereotypes - 'bad girls', 'monsters', 'babes behind bars'

The theatre and performance practices in this collection disrupt, expand and reframe representational vocabularies of criminalized women for audiences within and beyond prison walls

They expose the role of incarceration as a mechanism of state punishment, the impact of neoliberalism on ideologies of punishment and the inequalities and violence that shape the lives of many incarcerated women

In a context where criminalized women are often dismissed as unreliable or untrustworthy, the collection engages with theatre practices which facilitate an economy of credibility, where women with experience of the criminal justice system are represented as expert witnesses

4. What Works: The Affective and Gendered Performance of Prison - Aylwyn Walsh (University of Leeds, UK)

9. Acting Out: And Interview with Sherrin Fitzer by Ashley Lucas (University of Michigan, USA)

Inside a Cloud (2016) by Sabrina Mahfouz

10. 'There is Still Life in me, Despite What I Have Done' – Assuaging Woundedness Through Collective Creativity – Katharine Low (Royal Central School of Speech and Drama, UK) and Clara Vaughan (Market Theatre Laboratory, South Africa)