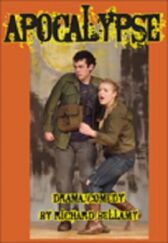 Large Mixed Cast
All Mabeline "Mabes" Collins can think about is going to the Prom with Sam Finnick, lacrosse star

Her bookworm sister, Serena - immersed in a steady diet of post-apocalyptic young-adult fiction - predicts The End of the World

A vast alien aircraft in orbit!

Panic in the streets!

And a plague of zombie-vampire hybrids breaks out

There's also the school chess nerd, Charles Wiggin (who seems to be in love with Mabes)

And the psycho Meyer twins, Alice and Cassie

Many months later, Mabes is no longer a shallow teenager attached to her iPhone

As a member of a survivalist group called Undaunted, she must struggle against cannibals, zombie-vamps and a mutant mountain lion

With its blend of action, comedy and serious drama, Apocalypse offers young actors a wide range of dramatic opportunities and a chance to parody popular young-adult novels such as The Hunger Games and Divergent