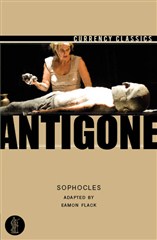 Polyneices and Eteocles, two brothers leading opposite sides in Thebes' civil war, have both been killed in battle

Creon, the new ruler of Thebes, has declared that Eteocles will be honoured and Polyneices disgraced

The rebel brother's body will not be sanctified by holy rites, and will lay unburied to become the food of carrion animals

What a great piece of theatre! The adaptation by Eamon Flack retains the power of the original, while making it not so much up to date, as timeless - ArtsHub