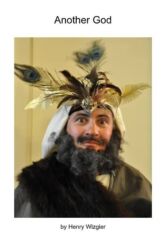 Celtic Britain is awash with religions, but it is the arrival of one that does not demand expensive sacrifices which captures financially astute Caproc's interest

And when he and his wife Gweneth are visited by Sibius, a Roman missionary who preaches this 'free religion' called Christianity, they agree to become its first converts in Britain

But this decision upsets the tribe's Druid who sentences Caproc to death, even though he is no longer allowed to do so under the Roman occupation law

Sibius manages to report this to the authorities

But will the Romans get there in time to save Caproc?