Another Day's Begun - Thornton Wilder's Our Town in the 21st Century 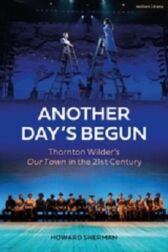 A work of startling originality when it debuted in 1938, Thornton Wilder's Our Town evolved to be seen by some as a vintage slice of early 20th Century Americana, rather than being fully appreciated for its complex and eternal themes and its deceptively simple form

Through extensive interviews with more than 100 artists about their own experience of the play and its impact on them professionally and personally – and including background on the play's early years and its pervasiveness in American culture – Another Day's Begun shows why this particular work remains so important, essential, and beloved

One year after the tragedy of 9/11, Paul Newman, in his final stage appearance, played the Stage Manager in Our Town on Broadway

After the 2017 arena bombing in Manchester UK, the Royal Exchange Theatre chose Our Town as its offering to the stricken community

Eighty years after it was written, more than 110 years after its actions take place, Our Town continues to assert itself as an essential play about how we must embrace and appreciate the value of life itself

Another Day's Begun explains how this American classic has the power to inspire, heal and endure in the modern day, onstage and beyond

Our Town reminds us of what unites, rather than divides, humanity. Howard Sherman has provided a valuable current portrait of the play's ever timely and timeless testimony to our better selves ~ Tappan Wilder

To explore the pages of this book is to rediscover the joy and wonder of theatre itself. Our Town is arguably the greatest American play, and Howard Sherman helps us understand how it retains that power for new generations, new visions of America, and communities around the globe. The stories he tells, like Wilder's play itself, make their gentle and mysterious way into our hearts, until we too are transformed by a bigger and more generous vision of our world ~ David Henry Hwang

If Thornton Wilder ever wondered: “What difference will it make if I write this play?”, Howard Sherman's Another Day's Begun answers him. Sherman's book is a remarkable case study of Our Town in multiple contexts. We are given testimony from all involved in how one play makes an enormous difference in appreciating our time on earth and realizing our connection to each other. A must-read for all who love theatre, and an eloquent gift for all of us who wonder what difference it makes to write during our allotment of days ~ Paula Vogel