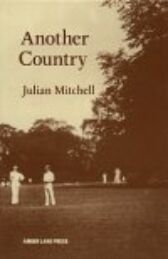 Another Country is set in an English public school in the early 1930s. The future leaders of the English ruling class are being prepared for their roles in the Establishment

But the two central characters are outsiders: Guy Bennett, coming to terms with his homosexuality, and Tommy Judd, a committed Marxist. Judd wants to abolish the whole system of British life, Bennett wants a successful career within it - but school, and the system, have traditional ways of dealing with rebels

"In this subtle, absorbing and deceptive play, Julian Mitchell persuasively examines the seeds of tribal snobberies sown in the pre-war heyday of the British public school and reaped today in a harvest of spy scandals in top places" ~ Jack Tinker, Daily Mail

"The politics of the Fourth Year Library are the politics of the upper echelons of the Civil Service; and thus Mitchell is able to write a genuinely exciting and densely political play. His acerbic wit finds a perfect match in the precious self-importance of his subjects" ~ John Ashford, Time Out

"Mr Mitchell creates the turkish-bath atmosphere of his monastic community most convincingly and his dialogue fizzes and flashes with his wit..." ~ Francis King, Sunday Telegraph