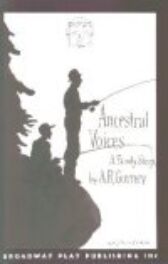 "If the family is the key theme of American drama, A R Gurney's ANCESTRAL VOICES: A FAMILY STORY is a beautiful chamber work in that great tradition. The short play is staged as a concert work, with five performers sitting on chairs in front of music stands, where they've laid their scripts. The five are playing members--grandfather, grandmother, father, mother, son--of a rich WASP family in Buffalo NY between 1935 and 1942, with a brief coda from the 1960s. The son, Eddie, who goes from age 8 to 12, is our narrator, guide and point of view.... This lovely play unites the microcosm of family to the macrocosm of America at war. On Eddie's first date he brings his girl a paper `war-sage'. It's also about something in between--a city. It's an elegy for Buffalo, a once-glorious place whose fortunes are declining. The texture of life in Buffalo is heartbreakingly evoked in ways reminiscent of The Magnificent Ambersons.... This is a magical play, not a mere exercise in uncritical nostalgia, but a nuanced reminiscence full of time and change and loss and suffering--as well as joy." Donald Lyons, New York Post

"...A R Gurney's genteel and gently comic ANCESTRAL VOICES...leaving exceedingly pleasant memories in its wake. Mr Gurney's play is performed in the manner of his popular epistolary drama LOVE LETTERS, with the cast reading from scripts while seated on a bare stage.... The hybrid Mr Gurney has produced is as elegantly faceted as a marquise diamond. What distinguishes the tales is the rueful maturity with which it is recounted by a man gazing back over the decades. The characters feel like fully fleshed-out cousins of the denizens of the novels of John Cheever, to whom the dramatist is often compared. The production is not dramatic in the strictest sense, either; the flare-ups in this confrontation-averse clan flicker only for instants. Yet isn't that the way a lot of families let off steam?" Peter Marks, The New York Times

"...with ANCESTRAL VOICES, the result is a wistful, colorful companion piece to LOVE LETTERS. That two-character epistolary goldmine, of course, has been similarly read on stages, cruise ships and wherever pairs of actors hunger for quick-study, quality work. Given the new one's larger cast requirements, it is not likely to duplicate the phenomenal popularity of its predecessor. The story of unraveling expectations in a society that considered itself a constant, however, is no less captivating a human document of recent but very foreign times." Linda Winer, Newsday Originally performed at Lincoln Center Theater, New York - Spiral-bound text for onstage use