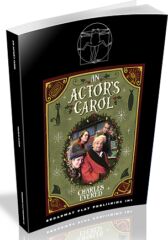 "The triumph of Charles Evered's An Actor's Carol is that it takes an old story and makes it seem new his modernized take on Dickens' ubiquitous holiday parable takes the Ebenezer Scrooge story out of Pre-Industrial Revolution London and plops it in a squalid playhouse where season after season of no-budget theater has been subsidized by the holiday cash cow that "A Christmas Carol" has become. It works, because Evered's even-handed, light-hearted reinvention of the source material not only delivers Dickens' original story of human redemption, but also adds some very relevant ideas about tolerance, inclusion and the theater" ~ Michael C Moore, Kitsap Sun