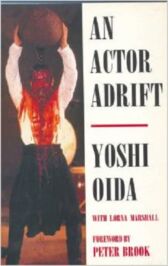 Trained in the traditional Japanese arts of Noh theatre, Kabuli dance and Bunraku storytelling, he had taken the bold step of leaving his own country in search of a fresh vision of theatre

Since then he has become a leading member of Brook's company

He participated in the extraordinary explorative journey through Africa, an expedition without precedent in the history of theatre, and has played leading roles in The Ilk, The Conference of the Birds, The Mahabharata & The Tempest

But An Actor Adrift is not only a fascinating personal story of an actor at work, his account includes an explanation of the genesis of the techniques and exercises which have formed the basis of the Company's internationally celebrated work

"An Actor Adrift" is a remarkable document because it analyses in a vivid and original way the practical experiences of an actor in whom Eastern and Western culture come together. I was happy to re-discover so many of the experiences Yoshi and I have shared over the years" ~ Peter Brook