American Political Plays in the Age of Terrorism 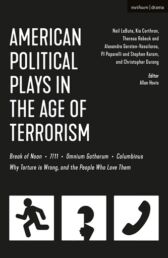 Allan Havis's introduction addresses a variety of terrorism cases from the last 25 years, examines several theories of the root causes of modern terrors, and underscores how theatre forms a unique contour to social and philosophical thought on terrorism

With a foreword from Robert Brustein, the Anthology features:

Why Torture is Wrong, and the People Who Love Them ~ Christopher Durang