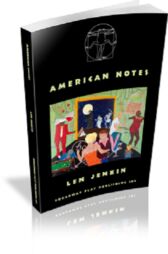 Produced by New York's highly regarded Public Theater, the play employs brilliantly imaginative avante-garde techniques to highlight both the dreams - and delusions - which infuse and motivate our modern world

The play is made up of a series of concurrent actions - some set in a tacky motel, some elsewhere - involving a group of disparate but curiously related people ...

There is the young night clerk, Pauline, who studies her high-school English Lit notebook, while growing increasingly fearful of the unseen and unwanted suitor who lies in wait in the motel parking lot

A pair of seedy bar denizens who occasionally break into song

And a mysterious drifter, Faber, who, somehow becomes the catalyst which fuses all these divergent elements into a cohesive, and often wildly funny whole

And, in so doing, makes the play both an encapsulation of the American myth and, at the same time, a telling comment on what is right - and wrong - with this myth

" it has a cumulative, atmospheric effect, tantalizing our senses at the same time it creates a haunting iconographic world" ~ The New York Times

" .. a kind of anti-Our Town. The weird backwater in which it's set is a little surreal and a lot seedy, populated by nighthawks, drifters, pimps, and hucksters" ~ Chicago Reader