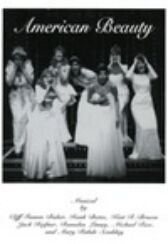 The first act focuses on key events leading up to the last night of competition, while the second act sweeps us from the contestants' opening parade to the final moment of coronation

The talent competition featuring a montage of country, pop and operatic singers, a marimba player, a tap dancer, a twirler and an ill-performed dramatic monologue, is hilarious

Through a medley of serious and satiric monologues and scenes, American Beauty also introduces us to an array of secondary characters including backstage mothers, pageant judges, commercial sponsors, and flamboyant choreographers

In a satisfying plot twist at the end of the show, the audience discovers that each of the contestants was crowned "Miss Delta Queen" in competitions ranging from the present to the past

Songs include: "I'm in a Pageant!," "Pageant Mothers and Daughters," "Something's Gonna Happen" and "Fireflies and Shooting Star"

American Beauty captures all the anxiety, the fear and the elation involved in competition, while underscoring each contestant's courage and determination. American Beauty has a big heart" ~ Richmond Times

"American Beauty spoofs beauty contests ... but, first and last, it values the human beings who participate in them. The effect is lump-in-the-throat stunning. This show is a deligh" ~ Richmond News Leader