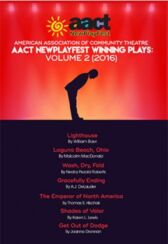 William Baer and Others

Over a two-year period, playwrights submit their play to AACT for consideration, and winning scripts receive a world-premiere

Luce, a lighthouse keeper and travel writer, is surprised by a visit from Michael, a detective with whom she's been having a long and intimate correspondence. Together, they are forced to deal with her suspicions about the doctor who is treating her and her best friend, Alice, for a rare form of skin cancer. As Luce's condition continues to deteriorate, both Michael and Alice are forced to deal with the devastating results

Beth Fuller is divorced, soon to be homeless and estranged from her son, Andrew. As she tries to move in with her ailing mother, the two begin feuding. In desperation, Beth calls on a doctor to declare her mother incompetent and even enlists Andrew for support. As the fight grows between the women, they find themselves faced with the same realization: dying with dignity means dying with love

Dove, a middle-aged surfer/stoner, invites his teenage-era friends to his bungalow after his wife and daughter move out. Champagne and margaritas flow, igniting a funny, sentimental reunion that is fraught with long-simmering resentments and hidden agendas. Old jealousies and passions come to the surface. The next morning, they nurse their hangovers and try to come to terms with their past, present and future

The time is July, and the city is New Orleans. Two resentful sisters are stuck with each other, trying to keep their deteriorating family laundromat going. Their second challenge is Uncle Slackjaw, a Vietnam POW and wounded soul. The sudden death of their uncle and the arrival of a mysterious young woman with a generous offer gives them a shot at saving the laundromat. It also gives them the potential to unlock their cages of torment, especially the torment of their own guilt

Molly is enjoying an enviable life, with a great job, great husband and talented kids when her long-missing, fugitive father appears with plans to turn himself in. Family alliances shift as she decides how to handle the fugitive under their roof. It takes a DUI, an ill-timed communal prayer, a food fight, three lawyers named Henry and the collapse of her father's plan to reveal Molly's path. There are all kinds of second chances. When it comes to family, the important thing is to grab one and make it work

Leo, a hypochondriac hack writer, becomes interested in the story of Joshua Norton, an eccentric 19th-century businessman who went bankrupt and then went crazy. Leo is inspired to write a serious biography of the man, but begins to question his sanity when Norton and characters from War and Peace begin to show up at his house. It seems his only alternative to insanity is to assassinate Norton

Blending elements of mystery, comedy and tragedy, this play tells the story of two young soldiers in Vietnam 1971 and their mothers 10 years later, as the women attempt to come to terms with the incident that blew their lives apart. Inspired by real events, the story provides an intimate, personal exploration of military, race and class warfare