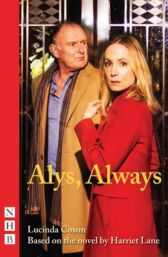 Frances works on the books pages of a Sunday newspaper

She's quiet and capable, but nobody takes much notice - her face is always pressed to the window, on the outside, looking in

But then one evening, driving back to London after visiting her infuriating parents, she comes across an overturned car crumpled on the side of the road

And now she begins to wonder:- what will it take to stay and belong?

This stage adaptation was premiered at the Bridge Theatre, London, in February 2019, directed by Nicholas Hytner and starring Joanne Froggatt and Robert Glenister