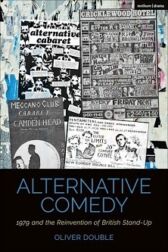 In the late 1970s, the alternative comedy scene exploded into life in Britain and completely changed the style, subject matter and politics of British stand-up

This book, subtitled 1979 and the Re-Invention of British Stand-Up, draws on a wealth of archive material – including unpublished recordings of early performances – and new interviews with key figures such as Alexei Sayle, Andy de la Tour and Jim Barclay, to provide a detailed history of the early scene and an examination of the distinctive modes of performance style which developed

Beginning with its origins, the volume traces the influence of American stand-up, and in particular the significance of Mort Sahl and Lenny Bruce as the originators of a style of stand-up that influenced the British pioneers of alternative comedy

But it also looks at smaller venues and less celebrated acts that have not been as well remembered, including ranting poets and street performers

Finally, it looks at alternative comedy's legacy, showing how it was the starting point for the UK's thriving and varied live scene, which encompasses anything from small pub gigs to huge arena tours