All the President's Men? 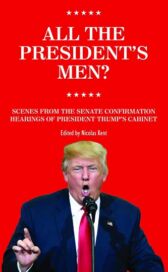 Scenes from the Senate Confirmation Hearings of President Trump's cabinet

Attorney-General Jeff Sessions, a leading campaigner for the President and now his chief law officer

The appointment of these men will have huge implications

They will lead the administration's policy on Russia, the Middle East, Iran and North Korea, on human rights worldwide, on the Paris Climate control agreement, as well as on the civil rights and the health of millions of Americans

Each of them had to fend off accusations ranging from corruption to deceit or racism.

These gripping and dramatic verbatim Senate sessions probed their fitness for office, and give us a vital insight into the future policies and direction of a Trump Presidency

★★★★ "Theatre has the unique capacity to reveal politics in action. Trump's allies squirm under the Senate spotlight" ~ Guardian