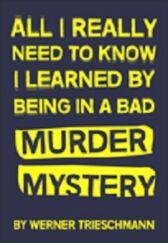 Large Mixed Cast
Look out, our band of lovable yet impossibly inept thespians are onstage again ...

Last time, we saw our Company of really bad actors in All I Really Need to Know I Learned by Being in a Bad Play

In that comic disaster, they butchered Romeo and Juliet, performing the timeless classic in a Starbucks while wearing potato sacks and bowler hats

This time, our terrible troupe takes on The Genre That Will Not Die ...

And struggle to understand what a red herring is

Meanwhile, the Director and Stage Manager wouldn't really try to murder someone during the murder mystery, would they?

Whatever, chaos rules the day as time is running out for cast and crew to sort out this mess

Safe to say, you will never look at a whodunit the same way again as we bring up the curtain on bad accents, murder and laughs