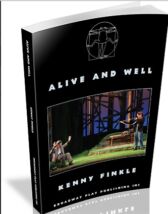 It tells the story of a mismatched pair ...

Carla - a big city reporter from the North

And Zach - a Southern tracker and Civil War re-enactor

With whom she must reluctantly work with to research her story

In their ensuing quest, they repeatedly exasperate each other

And find much more than either bargained for

An entertaining joyride to make even skeptics believe in true love!

"Almost by definition, you know how a romantic comedy will end. Whether it's Tom Hanks and Meg Ryan, Claudette Colbert and Clark Gable, or Gregory Peck and Audrey Hepburn, in the final scene they will declare their love for each other. So the measure of a romantic comedy is how engaging the journey. The journey that is Alive and Well is well worth taking" ~ Steve Heyl, Edge Los Angeles