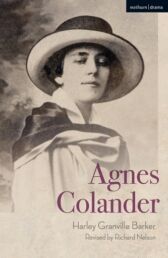 It's three years since Agnes, an artist, left her unfaithful husband Henry

As she travels from London to France, Agnes finds herself torn between Otho, a worldly Danish artist

And Alec, an infatuated younger suitor

This witty and compelling exploration of love, sexual attraction and independence was written in 1900 and unearthed among Granville Barker's papers in the British Library a century later

"When I first read it I was gobsmacked. It was so modern" ~ Trevor Nunn

★★★★ "A bona fide revelation the crucial, thrilling thing is that it works, holds our attention, captures the ebb and flow of recognisable confused feelings" ~ Daily Telegraph