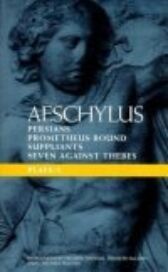 The Persians - based on the destruction of the Persian invaders in 480BC, breaks with the Greek tradition of purely dramatising myths to deal with the recent past and with characters who would have been familiar to its first audience in 472BC

Suppliants follows the plight of Danaus and his daughters, in flight from a fateful marriage contract with the King of Egypt's sons and shows the triumph of humanity over brute force

Translated by Kenneth McLeish and Frederic Raphael, these plays are widely studied in schools, colleges and universities